I'm very happy to send a new camera source element patch to support Android Camera 2 API.  This implementation is a part of R&D work which is sponsored by Collabora, Ltd.

Not much later since the previous element, ahcsrc, has been merged into 'gst-plugins-bad', Android N announced their public native level APIs. This news brought me another R&D opportunity to implement same featured, but more stable and little bit faster element to handle Camera Devices on Android.

I named the new element as 'ahc2src' because the previous one is just 'ahcsrc' and the fundamental API is Android Camera 2 NDK API. That means JNI is no longer required to access Camera devices. To understand why 'ahc2src' is better, here's comparison chart.


Regarding memory copy, I'm not sure whether it doesn't perform inside of Android. However, ahc2src itself just passes image pointers to source pad and manage the reference counts.

How to get this new element?

Until merged and released gstreamer images which are built for Android Nougat, my personal repository will be continuously maintained to provide 'ahc2src' element. If you want to build from scratch, it might be annoying because of some issues which come from Android NDK.

See the details in the below links;

In my personal repository, the patches are ready to build. It will fetch 'gst-plugins-bad' from here.


Note that 'wip/ahc2' branch is potentially or frequently overwritten by forced push.


Then, the generated SDK image should be extracted to a proper path. (e.g /Users/justin/Library/Android/gstreamer/devel/arm64)

From the point of Android application view, there's not much different from when using 'ahcsrc'. In theory, it might be enough to replace 'ahcsrc' with 'ahc2src'.


Then, you should modify 'gradle.properties' to set a proper gstreamer SDK path. (e.g, gstAndroidRoot=/Users/justin/Library/Android/gstreamer/devel)


If there's no error, the example application will be installed successfully. 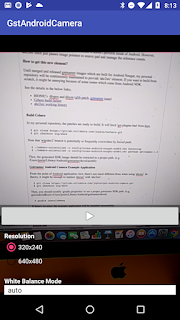