A couple of months ago, I was hesitating to go to somewhere in North America because it is so far, and above all, topics of the conference are little different from my official domain. However, my curiosity about new area upstaged many obstacles so I could attend this time.

It was held in Portland, Oregon. The city looks like full-grid which I've built in SimCity and very quite and not crowded place. 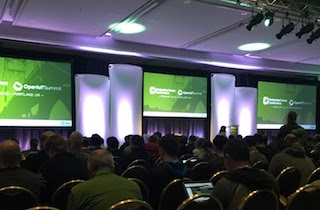 Gustavo Padovan from Collabora has talked Unifying Android and Mainline Kernel Graphic Stack, but unfortunately, my another interesting session was opened at the same time so I missed his session. I will check some other sessions including his session later when the recording is registered to Youtube.

As for myself, I tended to take the sessions in Open IoT Summit, especially regarding RTOS and OTA matters. A year ago, Zephyr was introduced, but now, it wants to be a LINUX for end-devices.

Another RTOS, RIOT-OS, was showed in this conference. RIOT-OS supports more architectures than Zephyr because it has developed since 2013. However, most of people in the session worried about its license. It is a free open source software under LGPL 2.1. However, due to the characteristic of industry who potentially uses RTOS, the license policy would be an unsolved problem. In the case of Zephyr, it is developing under Apache License so it is relatively less restricted for the industry.

The other outstanding topic was OTA. I could see practical demonstrations to update software with less threatened methods. The traditional strategy for updating firmware is to have doubled space as a preserved area so substantial amount of flash is wasted even after produced, but one session proved that ostree is already available for providing enterprise level service.

Most of topics were very informative so I eagerly look forward to the recordings which will be uploaded soon.

I'd like to thank my employer, Collabora,  for sponsoring my flight, accommodation, and even time.